Recently I, and several of my poet friends, have been writing parodies. I think because with the pandemic and feelings about the UK government’s handling of the crisis running high, they provide a way for people to vent their feelings and lighten a dark mood with humour. There’s been a parody boom on all social networking platforms.

I discovered parody as a teenager in the early 1960s, when my father brought home a copy of Arnold Silcock’s Verse and Worse that was about to be pulped in the paper mill where he worked. It was full of the most amazing poems and had a big, fat section featuring parodies.

One of my favourites was Sellar and Yeatman’s version of Browning’s poem – How I brought the Good News from Ghent to Aix. The original line is:

I sprang to the stirrup, and Joris, and he; I galloped, Dirk galloped, we galloped all three;

in their version it becomes:

There were parodies of nursery rhymes. One I liked was:

Doctor Bell fell down the well
And broke his collar bone
Doctors should attend the sick
And leave the well alone.

And a real eye-opener was discovering that the poems I so loved in one of my favourite books, Alice in Wonderland, were themselves parodies. The Victorians, it seems, loved writing them.

Thomas Moore’s Lalla Rookh was a popular work to satirize, not only by Lewis Carroll. There have been many versions over the years. This, by James Payn (1830-1898):

I never had a piece of toast
Particularly long and wide,
But fell upon the sanded floor,
And always on the buttered side.

Even Charles Dickens had a go:

I never nursed a dear Gazelle,
to glad me with its soft black eye,
but when it came to know me well, and love me,
it was sure to marry a market gardener.

Dickens uses parody not just for humour (I love the comedic device of the unexpected non-rhyming ending) but also to make a comment about market gardeners. What was that all about? Presumably readers of the time knew.

So parody has been popular for many years. Pompous people whose views are overblown have always been targeted for taking down a peg or two. Things that are just wrong sometimes need the spotlight of ridicule shone on them. Witness the satire boom in the 1960s and later with programmes like Spitting Image and impressionist Rory Bremner’s TV shows.

Parody has been a life-long preoccupation of mine, both in verse and in music. And I’ve written so many over the years. I remember referencing William Blake as a young teenager with:

Hedgehog, hedgehog burning bright
In the hedgerows of the night…

So when my career as a children’s poet began, in the late 1990s, parody was bound to find its way into my work. I think the first was in The Monster That Ate the Universe (Macmillan), my second solo collection, a poem by Coleridge:

It is an ancient mariner
And he stoppeth one of three –
He stopped the person just in front
Why didn’t he stop me?

Later, I found many poems and verses to parody, such as Kipling’s If, Wordsworth’s Daffodils, Carroll’s Jabberwocky and, of course, nursery rhymes. I don’t think parody will ever go out of fashion, there are so many wonderful poems are out there just waiting to be recycled into something differently meaningful, topical, insightful or downright funny. There is something about knowing the original and then being confronted with it in a different context that is just so satisfying.

Roger Stevens is a National Poetry Day Ambassador, a founding member of the Able Writers scheme with Brian Moses and runs the award-winning website PoetryZone for children and teachers, which has just celebrated its 20th anniversary.  He has published forty books for children. A Million Brilliant Poems (Bloomsbury) was shortlisted for the CLPE prize and his book Apes to Zebras – an A to Z of shape poems (Bloomsbury) won the prestigious NSTB award. 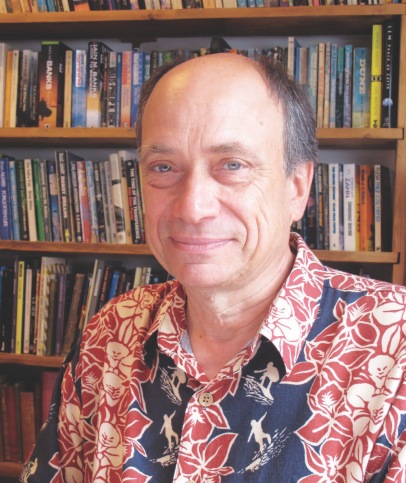 When I began going into schools as a visiting author, I would sometimes run workshops that culminated in the production of a printed collection of the work produced by the pupils. This book was often the highlight of the afternoon for the children. Seeing their poems in print seemed to validate the work for them and gave them something tangible to take away and to share with their family and friends. This – and a desire to give young writers a wider audience – was why I launched the Poetry Zone 21 years ago.

Young poets produce wonderful work. By launching the Poetry Zone I created somewhere for children and teenagers to send their poems and, importantly, see them published; a website where they could share their poetry and where it would be taken seriously. I found it very exciting. I knew it would be hard work – the project was me and me alone, every poem had to be read, vetted and the format tidied up for publication – but I thought it would be worth it. And it has been.

We started slowly, but within just a couple of years thousands of children were sending in poems and I was being contacted by grateful teachers and parents. Sometimes I would receive poems from every member of a class – the Poetry Zone had become a useful schools resource. Sometimes poems would come from individuals who were writing at home. They came from all over the English-speaking world – the UK, USA, Canada, New Zealand, Australia and from India, Japan and other parts of Asia.

I added interviews with children’s poets to the website; and information and advice for teachers. With some tips and a few lesson plans, those wary of teaching poetry have found out how rewarding it can be and how writing a poem can unlock the talent of even the most recalcitrant of pupils. The Poetry Zone has featured reviews of new poetry books and run more than 1,000 competitions – with publishers kindly donating prizes.

In 21 years, the Poetry Zone has received more than a million visitors and I’ve read and published around 30,000 poems by children and teenagers. Last year Troika published The Poetry Zone book featuring some of these poems.

Many children have grown up with the Poetry Zone, regularly sending me poems over the years. I have always provided feedback when wanted and mentored quite a few contributors. One of my regulars, American Claudia Taylor, was Commended in the Foyle Young Poets of the Year – I was very proud that she acknowledged my help when she received the award.

Harshita Das began contributing to the Poetry Zone from her home in India when she was around six years old. Her work always stood out. I encouraged her to practice, which she did. She is still young, but already an accomplished poet:

Violet and Celina Macdonald also began sending poems to the Poetry Zone when they were young children and carried on well into their teens. They lived in Tasmania then. Now they live in the UK. Violet has just won the Sir Peter Ustinov Television Scriptwriting Award for ‘The Wolf’ in the 2019 Emmy World Television Festival.

So, yes, running the website has been worth it! I have never allowed advertising on the site. The Poetry Zone has never made any money. It has always been a labour of love. It’s still a solo project. My reward has been seeing children enjoy everything that poetry has to offer – whether they are writing it or reading poems written by others and commenting on them.

One thing has stood out over the years: Poems by children can be every bit as good as poems written by grown-ups. We have a wealth of talented young writers all over the world – a cause for optimism and hope for the future of poetry.

Roger Stevens has been writing and editing poetry collections for children for 25 years. Roger’s books include Apes to Zebras, an A-Z of Shape Poems, Bloomsbury, I Am a Jigsaw; Puzzling Poems to Baffle your Brain (Bloomsbury 2019), Moonstruck; an Anthology of Moon Poems (Otter-Barry) and Be the Change, Poems to Help you Save the World, Macmillan. When not writing, he visits schools, libraries and festivals performing his work and running workshops for young people and teachers. He is a regular contributor to educational journals and conferences, a National Poetry Day Ambassador for the Forward Arts Foundation, and a founding member of the Able Writers scheme with Brian Moses. PoetryZone.