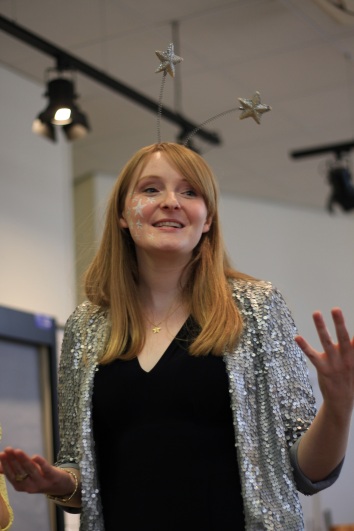 I started writing for children a few years ago, when I co-edited the Emma Press anthology Falling Out of the Sky: Poems about Myths and Monsters, and it’s one of the best things I’ve ever done. It has introduced me to a gigantic new group of readers, writers and co-creators, and a whole new library of joyous, devastating, transcendent poems. It has also given me valuable insights, particularly in terms of clarity and energy, into my writing ‘for adults’.

This was a distinction I had never made before, and one I am keen to blur. The world of children’s poetry makes plenty of room for adult poems, in anthologies and school lessons, and children are gloriously open-minded about deep, experimental creativity. The best children’s poems discuss the same big, knotty themes as adult poems, skilfully balancing accessibility with complexity. Now I would like to see the adult poetry world making more space for children’s poetry, which is a vital part of its foundation and future. I would love to get more people discussing, reviewing and enthusing about children’s poetry, and to encourage more poets to try writing for a younger audience.

Kate Wakeling is one of many poets, including me, who published their first poem for children in the Myths and Monsters anthology. Like many of the poets, she got hooked. And just two years later, Kate won the 2017 Centre for Literacy in Primary Poetry Award with her extraordinary debut Moon Juice. I’ve been in the audience when Kate has read children’s poems (my favourite is her shatteringly superb ‘The Demon Mouth’) alongside adult poems – and it’s an exhilarating combination. I wish more readings would mix the two, amplifying in a small but effective way the conversation between poetry for children and poetry for adults. In fiction, the young adult genre acts as a kind of bridge between children’s books and general novels, but we don’t really have an equivalent in poetry. To move, with no turning back, from the warm, fizzy, inviting world of children’s poetry to the secondary school canon can be disorientating. But if children’s poems were part of the general poetry conversation, sharing the same space, young people could study new, chewy works alongside more digestible ones.

So, let’s disrupt the distinction wherever we can. Let’s make more noise about the many children’s poets who are writing well-crafted, sensitive, probing poems about human emotions and the world around us, and zingy, experimental poems which push and pull language like plasticine – via social media, blogs, readings, and conversations with poetry friends. (If you’re looking for somewhere to start, the Children’s Poetry Archive is a great resource, as are the fabulous archives of the CLiPPA award. The Emma Press children’s list is also full of excellent, eclectic poems – many by poets new to writing for children.)

If you are a poet writing for adults, try reaching back the other way – remembering and celebrating the poems you loved as a kid. Try your hand at writing for children and share what you write, enjoying the licence for giddiness and experimentation. And costumes – see photo above!

Rachel Piercey is a freelance writer, editor and tutor. She co-edited and contributed to the children’s poetry anthologies Falling Out of the Sky: Poems about Myths and Monsters (shortlisted for the CLiPPA award 2016), Watcher of the Skies: Poems about Space and Aliens, and The Head that Wears a Crown: Poems about Kings and Queens, all published by the Emma Press. She regularly performs and runs poetry workshops in schools, and she has taught courses on writing poetry for children for The Poetry School. Her poems for adults have been published in The Rialto, Magma, Butcher’s Dog and The Poetry Review, as well as pamphlets with the Emma Press and HappenStance. rachelpierceypoet.com