I spent a long time thinking about what this blog would be about – most of it thinking about poems of hope and consolation, and some of it thinking about poems about spring, but in the end it turned out that what I was writing about was cats. I have two cats who are fond of me, but not each other, and both well into middle age. They have been very attentive while I have been at home. The Orange Cat sits by my computer as I work, next to me on the sofa as I read and follows me around in the garden digging up all of the things I have just planted. The Blue Cat – asks for food and sleeps on my bed. We serve our purpose for him. 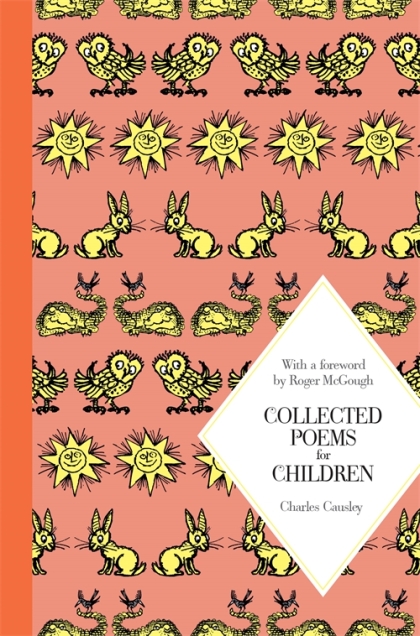 I have enjoyed seeing all the photos and videos of other people’s pets on social media and during work video calls. I probably know more about my author’s pets than any other part of their lives, and the very first author pet that I met belonged to Charles Causley. He had a magnificent ginger cat called Rupert. Rupert was an excellent correspondent and I still have photos and postcards that he sent me. When I was compiling Read Me: A Poem for Every Day of the Year Charles suggested that I include a poem by his friend A. L. Rowse called The White Cat of Trenarren. It is sublime and begins:

‘He was a mighty hunter in his youth

At Polmear all day on the mound, on the pounce

For anything moving, rabbit or bird or mouse –

My cat and I grow old together.’

Charles wrote about cats too – from I Had A Little Cat in which our narrator takes his cat Tim Tom Tay to market to sell but ends up bringing him home again:

‘But when the people came to buy

I saw such a look in Tim Tom’s eye

That it was clear as clear could be

I couldn’t sell Tim for a fortune’s fee.’

To In Sam Remo about Edward Lear’s cat Foss:

‘Deep in the garden of the Villa Tennyson,

Under a Fig tree, end of the orange walk

(Where, in his life, he’d often sprawl and snooze)

I was lucky enough to work on a few of Robert Westall’s books – and happily look after Blitzcat and The Machine Gunners to this day. Robert loved cats and always had several – he wrote in a letter to a friend ‘Cats to me are one of life’s great and certain plusses. When I get angry with God I can forgive him because he made cats – a divine and beautiful joke.’ He put together Cats Whispers and Tales: A Treasury of Stories and Poems as a tribute to them. This was also the book that introduced me to the magnificent Jubilate Agno by Christopher Smart, which begins ‘For I will consider my cat Jeoffry’,

‘For God has blessed him in the variety of his movements.

For, tho he cannot fly, he is an excellent clamberer.

For his motions upon the face of the earth are more than any other quadruped.

For he can tread to all the measures upon the music.

For he can swim for life.

For he can creep.’

… and Pangur Bán (the scholar and his cat), an old Irish poem, written in the ninth century at or around Reichenau Abbey. I like to imagine the monk hard at work illuminating a manuscript with his white cat looking on. It begins:

I and Pangur Ban my cat,
‘Tis a like task we are at:
Hunting mice is his delight,
Hunting words I sit all night.

Better far than praise of men
‘Tis to sit with book and pen;
Pangur bears me no ill-will,
He too plies his simple skill.

Practice every day has made

Pangur perfect in his trade;

I get wisdom day and night

I would love to hear what your favourite cat poems are.

Gaby Morgan is an Editorial Director at Macmillan Children’s Books and proud curator of the Macmillan Children’s Poetry List. She has compiled many bestselling anthologies including Read Me and Laugh: A Funny Poem for Every Day of the Year, Poems from the First World War, Poems for Love, Fairy Poems – which was short-listed for the CLPE Award – and A Year of Scottish Poems.

One thought on “Gaby Morgan: Cats”