Word Play with the Card players

Tom* and I we sat and spoke

about the kids, and them awoke;

writing (and drawing) til their pencils wore away or broke.

What was to be drawn and writ

would be about a bit of local art

in which they’d get to take a part,

with poets working in the school,

each employing, as a tool

Clare** would come there too, to note

and photograph the drawn and wrote

And, London, where I’ve also lived. As a tester for this, I visited a nearby primary school with ‘The Card Players’ by the French painter, Paul Cezanne. I explained that I had a French Connection because my dad was born in Paris and French was his mother tongue. I told the children and their teacher that I celebrate these French roots. We discussed a wide variety of roots and heritage present in the classroom. We then looked at the two card players present in the painting, at their opposite ends of the table.

Are they friends? Are they brothers? Are they farmers? Look how big their knees are! Can you supply a third person to put in the middle? What does this person look like? How big are the newcomer’s knees? What do the existing card players think about the new arrival? What does the table think? What does Paul Cezanne think of what is going on? 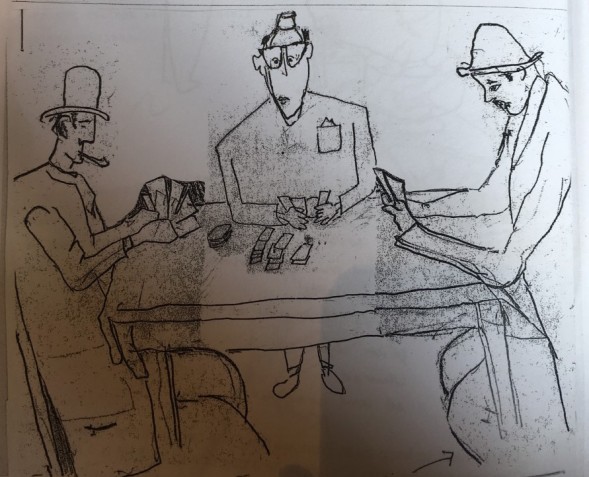 John’s own drawing in answer to this exercise!

The teacher in this class is most attentive,

as the children write and draw,

ignited by this image from the Courtauld.

I have learned, with running courses

in classes, workshopping in schools,

that tools held by teachers are such valuable resources.

They know the children, understand

when many hands go shooting up,

is the most prudent choice.

It may not be the chosen reply

will be the cleverest,

but it may be, here is a child too shy

to ordinarily supply their teacher

The teacher can also advise the guest

when it may be best

John Hegley was born in Newington Green, North London, and was educated in Luton, Bristol and Bradford University.

He has produced ten books of verse and prose pieces, two CDs and one mug, but his largest source of income is from stages on his native island. An Edinburgh Festival regular, he is noted for his exploration of such diverse topics as dog hair, potatoes, handkerchieves and the misery of human existence.

He is an occasional DJ, dancer and workshop leader, using drawing, poetry and gesture. He has been awarded an honorary Doctorate of Arts from what is now the University of Bedfordshire, and once performed in a women’s prison in Columbia.